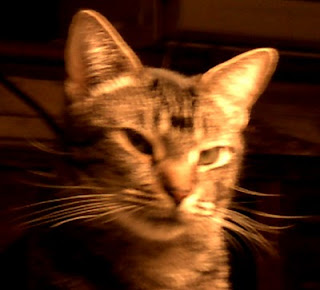 
According to Llewellyn’s Magical Almanac, today’s color is purple and the incense is nutmeg. Today is the first quarter waxing Moon in Aries and St. Agnes Day.

Today’s Tarot Card is the Four of Swords: recuperation. Rest bring healing peace and a break for you. You can rush to the rescue tomorrow when you are more clear headed.


Deck: Healing with the Fairies.
The Faeries say:
Take some time today for beauty. Beautify your surroundings or yourself.

Today’s Cat Comfort Card is:
Cat’s Cradle: “Time to untangle the knots. Don’t put it off any longer.”

Deck: The Fairies’ Oracle by Brian Froud & Jessica MacBeth
Today’s Faery Finder is on the lookout for:
Lys of the Shadows is about and I think you understand why. She is the Fae that helps the helpers of the world, giving them that extra energy to go the extra mile and she has her work cut out for her.

Today’s Lo Shu Number is 8 and the Element is Metal. The Ox finds conflict today. Today is not an auspicious day for haircuts, medical procedures, signing contracts, gambling, starting construction or births.

Today’s Message from the Universe is: “I am now ready to live a courageous life committed to the complete manifestation of the Divine Plan of earth. Neither difficult tasks now fear can stop me. I go forward with power and enthusiasm for God is with me and supports my every effort.” Annie Marquier creating a world of peace one thought at a time.

My shock of day came when I looked at the underneath of my kitchen cabinet and went, “WTF!” Over a year ago, we had a leak under the sink which we caught pretty darned fast because it flooded the kitchen. Everything seemed fine and then, over the past year, the lovely particle board the cabinet bottom is made of has been silently and very covertly swelling until last night it reached some sort of critical mass and then collapsed probably under the weight of a rotund cat. So, I have to take a really good look and see if the front of the cabinet is actually affected and made of particle board. Who the F makes a cabinet where there is water and plumbing out of particle board in the first place? That is a disaster waiting to happen. If I can get away with just replacing the bottom, I will use something like the board the use in your shower or if that won’t fit, the composite planks they use on patios. You can bet whatever I settle on, it will be water proof. Honestly, the products we have been making are almost as bad as the Chinese. On the other hand, my kitchen is over 35 years old, so I guess those cabinets don’t owe me a dime but this is just about the worst time to have to replace them, particularly since they are part of a U with the cabinets on the side and the breakfast bar and drawers on the other side. When you buy the builder’s house, you do not get the best construction, you get the left over parts I have discovered. No two windows are the same size. I had better shut up, I might have to sell the place in a few months.
The battle with Purrbie over the towel continues and has escalated to my towel. Once again the answer is, “Because I can.” He is so long that when he stands on his hind legs he can pretty much reach anything.
Napoleon succeeded in doing something only one other cat has ever done. He invaded my dreams and had me carrying him around. I awoke to find him glued to me. He awoke totally fuzzy and just laid on me for about 10 minutes trying to get his earth legs. Poor little baby had red rimmed eyes. I let him have a little extra yogurt.
There is no cat that can give you a snottier look than Purdy von Sweets. I just got the look. All I want is to get into the Magick Box to do the rest of the forecast. Ah, she has decided to move and now I can be allowed to work.
The Napoleon settled onto my lap blocking the laptop keyboard. He asked if anyone sends me catnip, food or that stuff humans like called money. I had to say no. Then he said, “Well, I purr.” It’s hard to argue with cat logic.
The doctor sent home some new ear mite medicine. I went to open it, spilled it on myself, got some in the cats ears and a little on my lip and got sicker than a dog. I do not like this stuff.
I went to save the forecast and said, “Oh goody, another date that is a dyslexic’s nightmare.” It took me three tries to get it right.
Posted by Janice Scott-Reeder King at 9:10 PM