Has Your Mind been Hacked?


Oh my, it's starting just as the elections swing into gear and every political and religious group has your phone number off Facebook, the NSA or somewhere else. Gee, have you ever wondered why anyone would vote against their best interests? I could hypnotize you and show you how. Hypnosis is a form of subliminal programing just in case you didn't figure that out. You might want to leave that phone in a drawer in another room because taking the battery out may not deactivate it if it has a built in backup that runs on very low power. Just a word to the wise. Mine will be residing in the kitchen in a drawer because the cats, having so much better hearing than we do, have been attacking my phone at night for no apparent reason or at least apparent to a human. Oh, the tin foil hat will have no effect on this because it is simply sound being sent over a phone at a level below a whisper that you cannot consciously hear or understand. It is all very simple technologically and works even better if you think you have a personal relationship with some deity that talks to you; too bad it is some guy in a basement reading a list of things you are supposed to believe or not believe and even if they go completely against your morals, beliefs and best interests, you will find an excuse to justify changing what you believe. They also proved that in psychological experiments in the 1960's and 70's. You don't stand a chance. They can even dumb you down and confuse you about what happened five minutes ago. They can rewrite history you lived and you will never know it.
Posted by Janice Scott-Reeder King at 3:54 PM No comments:


But before you go, return to the middle of this article and look at the countries around the Caucasus mountains. They are in line for demolition because some smart guy or girl with a cell phone camera, Facebook connection or a hacker deciding to take a look at the raw Google footage, might just publish some real history that the Illuminate do not want you to see. The last thing they want is proof of their existence.
Posted by Janice Scott-Reeder King at 11:57 AM No comments:

Nipmice, Your Cat Will Love Them

Nipmice are proudly made in the USA by a demented cat lady trying to find a natural alternative for fiber stuffed made with who knows what mice from China found in the Dollar and Pet stores. 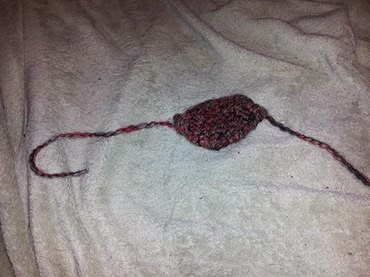 Once upon a time, a Druid witch was looking for some yarn to make protection mojo bags. She saw a HUGE skein of red, black and white all cotton yarn and thought that it was perfect. Red works for all mojo bags and protection from crazy people. Black absorbs all energy and white reflects all energy so with the proper contents, these babies would work for all types of psychic attack.
So, she bought it. She took it home. She started crocheting a mojo bag and half way through discovered this was the most god awful looking piece of crochet in the known universe. It was coyote (no offense to the trickster god intended) ugly.

So instead of a Mojo Bag, she just tied it off halfway though and tossed it on the bed. Within minutes it has disappeared and instead of saying good riddance to bad crocheting, she went to find it. It took a week or two and was finally found in a cat's stash.

She began to watch and discovered the cats were passing it between themselves as a treasured object. Thus, she made another one on a night when she couldn't sleep. It was taken within minutes, thrown, chewed, loved and hidden. So, she made another one. You see, she had about a pound of this god awful colored yarn to get rid of and no ideas but these weird shaped creatures she now named nipmice though they had no catnip in them. The latest version has a pinch of nip in them.

Nipmice are often created in the wee hours of the morning when she can't sleep with an audience of cats. Often, it is a contest to see whether she can tie off the nipmouse before the cat takes it. As you can see, this nipmouse barely survived the photography session. We have no idea why the cats love them. It's a cat thing. 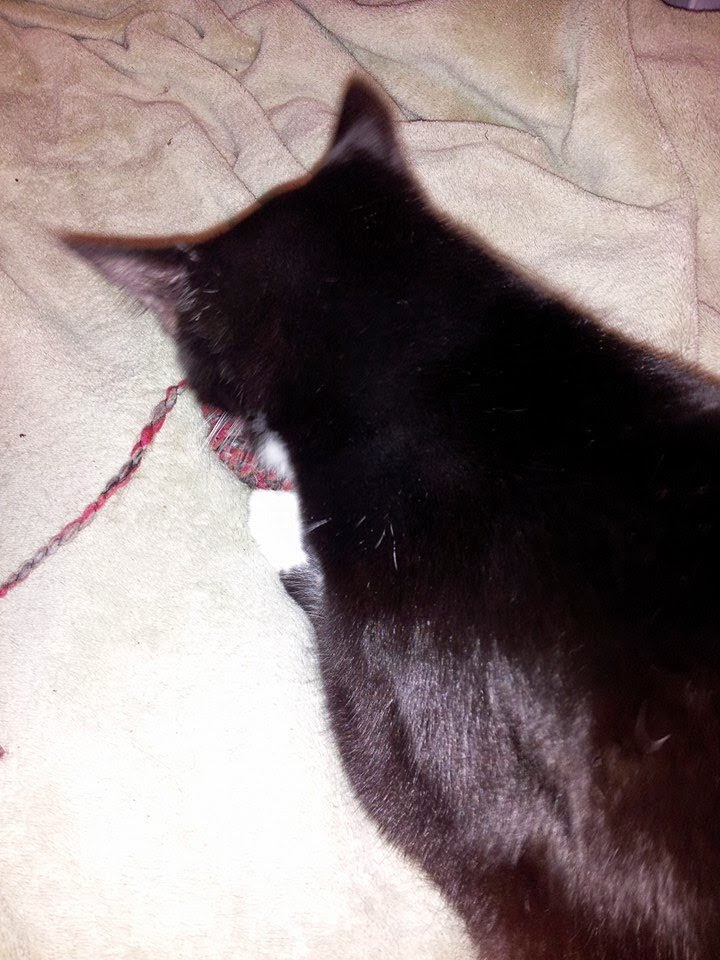 Since there is no chance of ever managing to get one made and shipped, here are the instructions to make your own. The Druid is allergic to wool so she uses cotton yarn.

If you can single crochet, you can make a nip mouse. Keep in mind the cat doesn't care what it looks like, they just love them. Hook size and gauge are not important. I make a chain of 5 and join the last and first stitch. Chain 1 and single crochet in every stitch until I have about 5 single crochets. Now comes the choice and just winging it is possible at every point but if you obsessive, there are several versions. If you want a head on the mouse, place 2 single crochets in every stitch making 10 then reduce by one making 5. Now you have a head. Single crochet 5 more stitches and go to making the body. Or you can just skip to this step. If you really want the typical mouse body, single crochet in 2 stitches and then increase one stitch in the remaining 3 making 8 stitches. Continue following this pattern until the mouse is the size you want and stitch the back end together leaving a long string end for a tail. I consider the front string to be a tongue. Otherwise, increase as you feel the need and then when the mouse is long enough start decreasing until you have one stitch and tie off. That is how most of mine are made.

The best time to insert some catnip is when you are at the widest part of the mouse. Warning, this can cause loss of fingers, loss of mouse and theft of the bag of catnip. Managing to actually get the catnip into the mouse may require locking yourself in the bathroom with it after spending an hour ejecting all cats from the premises. Finish the mouse in the locked room or you will learn the fine art of crocheting with a cat attached to the piece you making. A sixteen pound cat attached to your nipmouse makes turning your work difficult.

A Letter to the Youth of America

Dear Youth of America...... A Message from an Oldster

Either leave the country or do whatever you want. Yes, don't pick a profession based on income, be an artist, an actor, a writer, a gambler or a bum. Do whatever makes you happy. Travel, love and live your life now while you are healthy and able to do the things you want to do.

The deck is stacked against you. No matter how hard you work, scrimp and save, you are going to spend your old age, each and every day, juggling money between food, medicine and the water bill. If you manage to get a home, you'll have to put a quarter or more of your monthly retirement into the property tax man's pocket to support the life style of your local politician and his/her cronies or Condo Commandos. There is no way you can save enough money because the bar is raised higher and higher every year whereas the amount you earn and can save remains the same or becomes less as everything else gets more expensive. You can't win. The deck is stacked against you and in favor of the House, the Houses of the 1%. It's a crap game and you have no chance of winning. There is no way you are retiring, enjoying the end of your life or staying healthy because of the stress of being labeled a parasite, moocher and being reminded daily how much better the New Youth will be if YOU will just get out of their way and die. There is no escape from this poverty, hatred and sickness unless you get out of this country, now, while you can.


The Generation you want out of your way, that scrimped and saved, paid their bills, fought the wars for the profit of the 1%, ate the crap they claimed was better living through chemistry, paid their Social Security taxes so you could go to college and now has nothing left, not even their health.
Posted by Janice Scott-Reeder King at 3:57 PM No comments: