Technology is a wonderful and amazing thing. It could lift the world from poverty, move food and other goods at the blink of an eye from where there is excess to those that need them. It could speed curing diseases to unimaginable short times just by allowing scientists to communicate with each other and share ideas and experiments. It could allow us to take a tour of a far off and exotic place on our lunch break without leaving our chair or stepper. I might be more inclined to get on my treadmill if I was taking a walking tour of the Great Pyramid. Just imagine for a moment a world without boundaries, friends all over the world talking to you via the Internet, instant translations of any document you want to read, plenty of food, wearing a Sari from India, boots from Italy, Jewelry from Nepal and a burka to protect you from the sun to work without anyone thinking any the less of you while you stop to pickup lunch at a Mexican Taco Stand and get back on clean public transportation to make it to your job that you love going to because you have that midnight conference with China and Australian on how to save the bees and transport healing honey from New Zealand to Finland to make Mead that is a health drink without a single thought that includes FEAR or HATE. 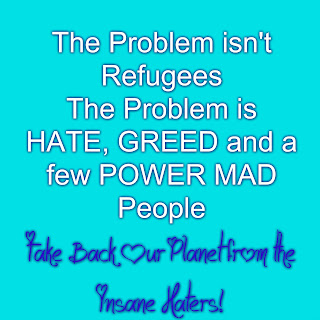 
Take back the planet! Please.
Posted by Janice Scott-Reeder King at 1:05 PM No comments: